The North Carolina General Assembly is the lawmaking body of the State of North Carolina. Similar to the United States Congress, the legislature is divided into two houses (or chambers)—the House of Representatives and the Senate. Senators and representatives are elected every two years, in even-numbered years, from districts established by law. Newly-elected legislators take oce on January 1, following their election in November. In both the House and the Senate, leaders are elected by their respective chamber and represent both parties. 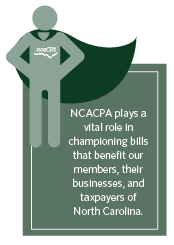